The President gave the guards new equipment, arms and equipment 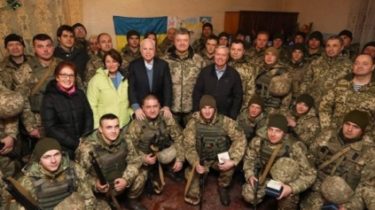 The President gave the guards new equipment, arms and equipment

The head of state noted that the work on creation of complex system of protection of Maritime borders.

President Petro Poroshenko during a working trip to Donetsk region visited the observation tower and took part in the launch systems for the early detection, prevention and identification purposes, “AEROS”, which is located in Mariupol, gave the guards are lightly armored boat UMC-1000, 16 units of armored cars, “HAMER” and new weapons.

The head of state gave the relevant certificates on the equipment and equipment unit commanders.

“The feast, not made to be empty-handed. So now the sailors of the guards got upgraded armoured fast patrol boat of Ukrainian production”, – said Poroshenko.

The head of state noted that the work on establishment of an integrated sea border security of our country and its Maritime economic zone.

“An example of how progress in this task is the updated post of technical supervision “Mariupol”. It is equipped with the latest early detection, prevention and identification purposes. Find any air, surface goal. It is necessary, and the swimmer will find,” – said the President.

According to him, “AEROS” is a joint Ukrainian-American development made on one of the enterprises of “Ukroboronprom”. Through aid, investment our American partners, this system significantly increases the efficiency of the reaction, – the President added.

“Two and a half years ago, we were completely blind and had no information. Today here at a distance of 50 km each way we precisely control our border security,” – said Petro Poroshenko.

The head of state noted that this system of early detection goals unique in that it “sees” from the air, water, land, able to lead and define the behavior to two hundred goals.

Read also: Poroshenko called the number killed in the ATO in 2016

“In the future we plan to develop and install five such complexes. They will be integrated in the unified state informational identification and analysis of surface and air situation in the Black and Azov seas and in the basins of the Dnieper and the Danube,” – said the President.