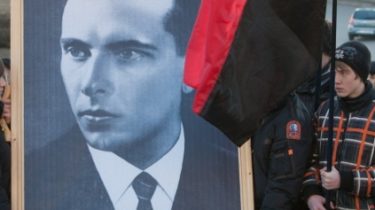 In the capital remembered the names of the heroes who perished in the ATO zone.

In the center of Kiev on Independence square continues rally on the occasion of the 108 anniversary of the birth of Ukrainian nationalist leader Stepan Bandera.

The meeting began with the anthem of Ukraine performed by more than a thousand supporters of the OUN leader. Also on the square remembered the names of those killed in the ATO area.

“We are the Bandera, and we are a nation of winners. Bandera is a symbol of the present of Ukraine, as Shevchenko”, – was heard on the Maidan.

Earlier, in the capital held a March on the occasion of the 108th anniversary of the birth of Ukrainian nationalist leader Stepan Bandera. The head of the column was a girl with kalinovoe wreath on his head who was carrying the portrait of Stepan Bandera.

See also: In the Lviv region died the nephew of Stepan Bandera

The security of the public order was provided by representatives of the national police.

We will remind that earlier in the Network appeared the recording of the interview with the conductor of the OUN Stepan Bandera, dated 1959. A 10-minute audio Bandera tells about the Bolsheviks, who spread a rumor about the defeat of the Ukrainian national liberation movement.