A native of Luhansk and volunteer: fighter Kozak went to war in August 2014 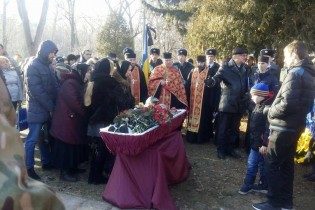 A native of Luhansk and volunteer: fighter Kozak went to war in August 2014

Today it was goodbye to the hero, over whose body abused Russian mercenaries.

In Kiev in the last journey spent Kozak. Character with the same Callsign – Leonid Providence – was 53 years old. Before the war he lived in the village mykhailivka of the Luhansk region, worked as an inspector for nature protection. When the occupation commenced, Kozak has taken his wife and two children in Kiev, and in August 2014 he volunteered to defend the homeland.

The squad leader of the recon team heroically died during a battle in the vicinity of the Town, covering the retreat of his group. Russian mercenaries seized the body and spread to the Internet videos of the abuse of the now dead fighter. The footage has caused uproar in Ukraine and the world.

To pick up Cossack from the occupied territory and buried with military honors, the Ukrainian army was to conduct negotiations with December 29.

And to say goodbye to Leonid Provedennom family and friends were able only today. At a memorial service attended by hundreds of people to the coffin stood in the queue.

The fallen Leonidas, Providence was 53 years old. Before the war he lived in the village of Mikhaylovka in the Luhansk region. Worked inspector for nature protection. The deceased left a wife and two children. The squad leader of the recon team were killed by enemy bullets during combat, near Avdeevka. A memorial service brought together hundreds of people.