On the front lit up the Holy fire of Vifline 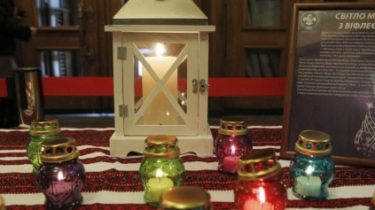 On the front lit up the Holy fire of Vifline

The volunteers gave it to Ukrainian soldiers.

2017 not brought to the front the long-awaited silence: intense firing along the line of defense, but now it is more of a provocative nature. And mines ‘ 82, 120-caliber and small arms – all this does not abate from the moment when the clock Moscow time struck the twelfth hour and marked the arrival of the new year.

Read also: the Russian military is afraid of the mob: they were forbidden to appear in occupied cities in the form

For the Ukrainian army provocative shooting started promptly at eleven Kyiv time and continues to this day. However, the festive mood here remains. To greet the soldiers in these days comes a lot of volunteers. They gave defenders an industrial zone blessed peace light from Bethlehem, which the scouts brought from Poland.

The fire were taken to orphanages, to families on the front line and many military units. For Christmas I plan to travel around the entire front line.

The new year has not brought to the front of the silence: there are wounded

Three of our soldiers are wounded – that’s statistics 2017. Intense hostile fire, which began at 23:00 new year’s eve, does not subside until now. However, this does not prevent the army to feel the festive mood and volunteers to welcome our soldiers.