In the center of Kiev, built a new pedestrian bridge between the two parks 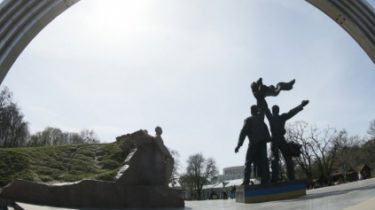 In the center of Kiev, built a new pedestrian bridge between the two parks

Also there are negotiations with investors to begin construction of the cableway from the right to the left Bank.

The Metropolitan government plans to start the construction of a pedestrian bridge in Kiev, connecting the Arch of Friendship of peoples with the Vladimir hill.

This was stated by the mayor of Kiev Vitaly Klitschko on one of the channels, the press service of the politician.

“We plan to start the construction of a pedestrian bridge that will connect the Arch of Friendship of peoples with the Vladimir hill. This will give the opportunity to make a new tourist route. We also deal with investors to begin construction of the cableway from the right to the left Bank, to Trukhanov island, and in the future will be tied to the water Park. This will also give a boost to the tourist attraction of the city,” said the mayor.

Read also: the Mayor of Kiev Klitschko went on vacation

Kyiv mayor noted that the city government is developing the tourism potential of Kiev. In preparation for Eurovision pays great attention to the development of tourism infrastructure.

“My goal as mayor is to do everything to the Eurovision song contest was held at a very high level. Music I love it all, so that world attention will be riveted to Kiev. So Eurovision is an opportunity to present our city. And we need to use it. We invest billions of hryvnias for the development of infrastructure. The contest will last several weeks, and the infrastructure in which we invest, we will remain forever,” – said Klitschko.

Read also: Klitschko called the number of stalls that are scheduled for demolition in Kiev in the new year

We will remind, earlier city authorities already promised to join Vladimir hill and kreschaty Park pedestrian bridge – such as “lovers ‘ Bridge”. Kiev Fashion Park was proposed to establish on the Vladimir hill sculpture Park, similar to what is on the Landscape alley, but this idea was not agreed to.

Also, in the Groin Park and on the Vladimir hill planned to build a pedestrian and bike paths, and on the hills they promised to do the mounting, so as not to hit the slopes and not to violate their integrity.