“Each hero”: the Ukrainian military successfully lend themselves to four-legged therapy 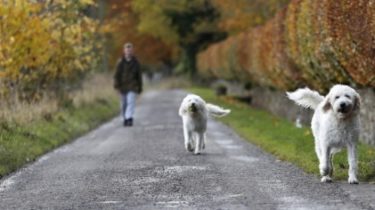 “Each hero”: the Ukrainian military successfully lend themselves to four-legged therapy

Therapists who are always in a good mood. For fighters ATO has introduced a rehabilitation program for the canadian sample. Doctors love to sit or even lie on the floor kissing when meeting and may even lick. But to doubt their professionalism is not worth it. They have certificates of education, says the story TSN.19.30.

Their uniforms are cute muzzle and yellow handkerchiefs with the words “another hero”. 4 tailed therapists came to the rehabilitation center to treat veterans. Bypass all. And choose their patients. Quiet and gentle boxer Ale made friends with Sasha.

“It is very difficult to explain why and how? But the dog always chooses herself. To a more relaxed approached Ales. To the guy who sits in the corner. He’s very calm. And Nessie came immediately to the most senior here, to the most experienced as she is,” say the handlers.

Nessie ripe old age. Friends with everyone scratching it behind the ears.

Effect Narada therapist Lyudmila. It is usually harder to deal with post-traumatic syndrome.

“The most important thing is the atmosphere. And of course, that dogs help to create an atmosphere a sense of security,” says the psychologist.

Doctors love to sit or even lie on the floor kissing when meeting and may even lick. But to doubt their professionalism is not worth it. They have certificates of education.

Jura is recovering along with his home therapist. Harvey learns to be a polite dog. A Dip after training will become a service dog and moved to his Wife. The soldier returned from the front wounded. The wounds have healed. Dip must cure the psyche.

“If I do dream, I just start spinning. And he feels the emotional state. And he wakes me up. He climbs on the bed and starts to lick me. Attack, lick, obnimaet. What there can be sadness?” – says the fighter.

Meanwhile, Dip lives with his coach. Marina is two dogs, besides the dip, there’s still nick. Six months, she training his dog. Next year teaches him to master. And should give ward the fighter. The only exception was nick. Picked her up on the street. She arranged her family.

“I’m not going to give to nick. Yurko project met. And while the trained dogs, decided to get married. We’re all going to live together,” the coach said.

This program was introduced with the support of Canada. All “Friends of the hero” gathered at the residence of the Ambassador. The founder project is a canadian journalist with Ukrainian roots.

“There is a very big stigma around mental health in Ukraine. And I saw on the front was a very powerful relationship between dogs and soldiers. And I thought, why can’t we make those links and bring them to the rehabilitation area,” says the initiator of the project.

Dogs therapists selected canadian experts. Now the project is 15 animals. And they are already working on a permanent basis.