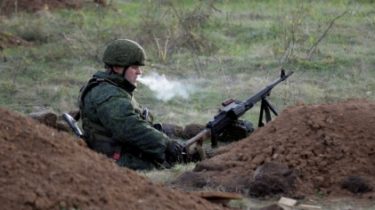 For the past day, two soldiers were injured.

Over the past day in the Donbass 39 times fighters fired at the Ukrainian positions, in which two soldiers were injured.

“In the direction of Mariupol mortars fired at the occupants of Shirokino. From APCS and grenade launchers repeatedly opened fire on Shirokino, Pavlopol, Marinka and Water. At Shirokino and Talakovka also fire was opened by snipers,” – noted in the headquarters.

On Lugansk the direction terrorists repeatedly fired at the Novozvanovka from grenade launchers and small arms.

“On Donetsk the direction with 82-millimetre mortars, Luhansk, and rocket-propelled grenades and small arms, the invaders fired on our positions near Mayorsk, Zaitseva, Lugansk, Avdeevka and Sands”, – is spoken in the message.

We will remind that on Monday, January 2, fighters carried out 32 of the firing on the Ukrainian positions. Terrorists from mortars and infantry fighting vehicles covered Shirokino.