Klimkin called the condition of lifting the sanctions against Russia 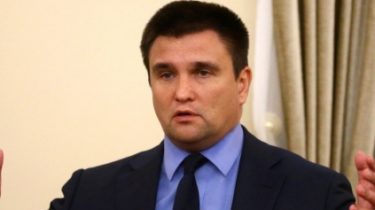 Klimkin called the condition of lifting the sanctions against Russia

The Ukrainian foreign Minister thanked the head of the OSCE for the support of the resolution on the Crimea.

Entered against Russia sanctions should be maintained until the de-occupation of the annexed Peninsula of Crimea.

“It’s very important and I want to stress that the sanctions imposed on Russia in connection with the occupation of the Crimea, should remain to the moment, as Russia will leave the Crimea”, – he said during a joint briefing with OSCE Chairman, Minister for Europe, integration and foreign Affairs of Austria Sebastian Kurtz.

Besides Klimkin thanked Austria, which became a co-sponsor and support the Ukrainian resolution on the situation of human rights in the territory of the occupied Crimea, which was later approved at the UN General Assembly.

In turn in SBU noted that unable to prohibit the entry of Le Pen in the Ukraine after such a Declaration on Crimea.