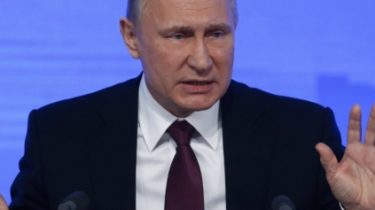 For a liberal democracy, it could end deadly.

Authoritarian Russia is the weakness of the Western democracies to expand their influence. But the danger is downplayed even more. For a liberal democracy, it could end deadly.

This writes Richard Hertsinger in the article “Putin reaches out to Europe – and Europe is watching”, published on the website of the newspaper Die Welt.

If you can’t defeat the enemy, get to his side, reads a well-known principle. Or try to downplay its significance. This version of the saying seems to be particularly popular in recent years among Western observers when we are talking about the Russia of Vladimir Putin. Although the observers were not seen to be sympathetic to the Kremlin regime.

Recently in “The New York Times” the famous Bulgarian political scientist Ivan Krastev warned of the transition to “the rhetoric of the cold war” with Russia and re-evaluation of Moscow’s influence on political developments in the West. Such opinions in various large German editions had a few experts on Russia.

According to the content of the articles, his “overreaction” to the aggressive policy of Putin, the West only increases the importance of the leader of the Kremlin, which is actually not as strong as he imagines. Much more reasonable, to a certain extent, to ignore its political and military threats and thus eliminate them.

Of course, none of these arguments are not new. We constantly hear, since, as Putin said the West is the enemy and violated the European world by the annexation of Crimea and invasion of Eastern Ukraine.

Surprisingly, though, they so often say now. Putin struck Aleppo and demoted the West to the statistician in Syria. Now, along with Iran and Turkey, he intends to establish order there according to their rules.

In addition, recently specialists of the Kremlin’s disinformation and cyber war have proved that they can manipulate even the presidential election campaign, the most influential nation in the world.

And soon the control of the leading power of the Western world will take over the club’s fans and business partners of Putin in the face of Donald trump and his closest associates. Soon to happen in the Netherlands, Italy and France.

The prisoners, Ukrainians, torture, drugs, occupation. What Putin said at a press conference

Ukrainians arrested in Crimea, no one was tortured, doping, Russian athletes did not use, drinking our neighbors to the North not more than the Europeans, and to exchange prisoners all for all Ukrainians do not want. So many hours of the press conference, President Putin repudiated many of the accusations in the direction of Russia. The results of the press conference, the Russian President summed up the correspondent of TSN.

Against this background, the Council discouraging sounds more relaxed to respond to the challenges of Putin. At the same time, probably no sane person never said that the crisis in the West is due solely to the subversive activities of the Kremlin.

Alice Bot from the newspaper “Die Zeit”, of course, quite right when he says that Putin “is not a cause of the crisis of liberal democracy. He just benefits from it”. But it is unclear how this is supposed to reassure us.

Upon closer examination, this conclusion is deceptive truth. Authoritarian and totalitarian leaders and movements have never been the cause of the crisis of those democracies, which they are, ultimately, eliminated. But they knew how to aggravate them so much that they ended fatally for a democratic society.

In this process of destruction is constantly help the Democrats who underestimate the danger. If today, the authoritarianism of Putin and his Western followers have teamed up to organized a strong force to destroy the crisis-ridden liberal democracy, it should make us incredibly anxious.

Read also: “Putin has long sought to sell us the Donbass”. Tuck said when they will hold elections in the Donbass

The fact that the weakness of the West is first and foremost an internal problem, in any case, do not minimize the danger posed by Putin, but rather turns it into a serious threat. Internally intact liberal democracies all his attempts at destabilization would have passed unnoticed.

At the same time, it is still possible to note the abundance of theories, belittling the significance of the threat. Recently, a former Kremlin adviser Gleb Pavlovsky recalled General statement that, unlike the Soviet Union, Putin’s Russia can not offer attractive ideology to its followers around the world.

It is true that Putin has no single ideology about the world and society, as in Soviet Marxism-Leninism. But, in a sense, in the West, his authoritarian social model ideologically and practically more attractive than the Soviet regime. It is unclear whether it attractive propertied classes, which in the case of the triumph of Soviet communism would have to reckon with the confiscation of property.

“”The fact that the weakness of the West is first and foremost an internal problem, in any case, do not minimize the danger that emanates from Putin.””

On the other hand, Putin’s system, with its symbiosis of the state, intelligence agencies and organized crime promises them the unrestrained enrichment free from the bondage of the law and monitoring democratic institutions and free media.

Another classic example of complacency – an indication of the weakness of the Russian economy. It is possible that one day it eventually will lead to the collapse of the ruling Russian regime.

But until then, we should expect that the worsening economic situation in the country will increase the aggressiveness of Putin’s foreign policy. He will be more need of confrontation in order to legitimize their power. And the fact that Russia is objectively inferior to NATO in military terms, and will not risk an open war with the Alliance is not a reason to relax.

It is also important that with the help of the permanent demonstration of its readiness to unscrupulous use of military force, Putin can intimidate, blackmail and divide the West, who now eschews any military involvement.

So, States will be responsible for a hacker attack during the presidential election. Republican Senator Lindsey Graham during a visit to Latvia said that the new strict restrictions will concern not only Russia, but also directly to its head.

“Over-reaction” of the West to this threat in any case not visible. Russia can not be afraid of sanctions for its war crimes and violation of international law in Syria. Moreover, Western politicians and the public have already trained to adapt the reality to the normative force.

So, Western governments and the UN referred to the forcible transfer of the population of Eastern Aleppo, which corresponds to the definition of crimes against humanity, the euphemism “evacuation” that can be noted as a humanitarian achievement.

“”There are fears that the United States during the reign of the new President will legalize the practice of Moscow, in violation of international law”.”

There are fears that the United States during the reign of the new President will legalize the practice of Moscow’s violation of international law and its claim to a “sphere of influence” in Eastern Europe. But it is impossible to think that the appetite of Putin will diminish. After that, he will be a huge step closer to its goal – to supply the whole of Europe dependent on his will.