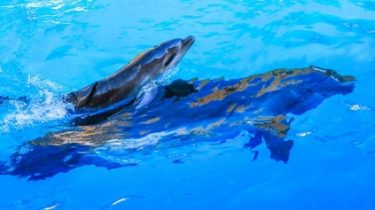 Subsequently, three of them came back on their own.

In Japan from the aquarium in the town of Taiji escaped a group of dolphins. Reported by the Ukrainian service of the BBC.

So, the aquarium staff noticed that the mesh which seperate pool for the dolphins from the ocean, was cut, making four dolphins escaped.

Later three of them returned themselves, and another is still at large, but swims nearby.

In the centre is unhappy that an unknown person cut the mesh and, according to employees of the aquarium, exposed the dolphins of danger.

Note, the annual hunting of dolphins and whales in Taiji, which runs from September to March, often provokes international criticism.

We will remind, earlier it was reported that in Kherson region, rescuers together with local residents rescued Dolphin that washed up on the shore.