Prosecutors and a retired judge. The journalists found out who lives in the neighborhood of Mezhyhirya 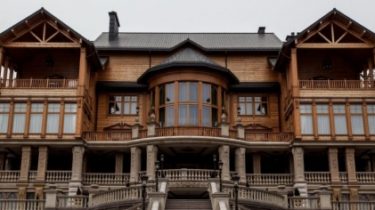 Prosecutors and a retired judge. The journalists found out who lives in the neighborhood of Mezhyhirya

The houses here are up to $ 2 million, and the land is more than $ 6 thousand for a hundred.

500 metres from the residence Mezhyhiria built the estate of the spouse of the prosecutors of Rogatchov, relatives of the Deputy Prosecutor of Kiev region Milevsky and judge of Appellate court of Kiev region, Oleg Levchuk.

This is reported by “Nashi Groshi” referring to the extracts from the registry of rights to immovable property.

See also: state Administration Affairs tell us what the car rides on Poroshenko and the employees of AP

As you know, in Novi Petrivtsi lives Arseniy Yatsenyuk. Also there is the house mistress Yanukovych Lyubov Polezhay, now arrested by the Prosecutor’s office.

The houses here are up to $ 2 million, and the land is more than $ 6 thousand for a hundred.

Between the houses Yatsenyuk and Polezhay is the estate on 389 square meters with outbuildings on site, which is owned by the Prosecutor of Department of the information and statistics of the GPU Xenia Rohatyuk.

The construction on a plot area of 15 acres started in February 2012.

Husband Rohatyuk Igor in the past was the first Deputy Prosecutor of the Cherkassk area, then worked in the Prosecutor’s office Deputy head of international legal Department-the head of the international cooperation Department.

In October 2014 Rohatyuk Igor was purging. For 2015 received unemployment benefits. And in July 2016 he occupied the position of senior lecturer of the Department of training prosecutors on supervision of observance of laws by bodies that conduct operative-investigative activity, inquiry and a pretrial investigation of Prosecutor’s office Netacademy.

In the declarations of the wife of Rogatchov also pointed out three apartments. One of Kiev apartments located in a luxury building on Nikolskaya street-Slobodskaya street, 4B with panoramic views of the Dnipro.

According to the publication, the estimated cost of such housing is $ 180-190 thousand, although in the official documents of the price of the apartment – 663 thousand.

Total income of Rogatchov for the last three years amounted to 1.1 million. Rohatyuk Igor and his parents business has never worked. Economic activity was only the father of Xenia Rohatyuk – Victor Nikityuk. He checked the co-owner of several companies, whose income does not exceed 150 thousand hryvnias a year.

As officials gave soldiers ATO on 10 acres of the swamp

The allotment to each participant of the ATO is a noble initiative from the state. However, in the Ukrainian realities, there will always be those who spoil everything. Local officials do not know how otherwise is to give something, otherwise they will be a lot of claims. The trouble is that the good land has long been appropriated or sold, so the soldiers get the worst. For example, the “resort” area in the swamp.

Another mansion in the Azure garden belongs to the family of the Deputy Prosecutor of Kiev region and son-in-law many years accountant of the GPU Ludmila Erohovoy Andrey Milevskiy.

15 acres of land recorded on the brother of the Prosecutor Alexander Milevsky, 15 – his brother’s wife Tatyana hmelnitskaya. This land is under-construction mansion and several outbuildings.

Alexander Bogdanov was reported as a natural-person entrepreneur – according to the documents was a middleman in placing ads in the press. Also had a firm “Adverfary”, “Peak”, was the one in charge “Adversus”, which was engaged in sale and installation of payment terminals.

The judge of appellate court of Kiev region, Oleg Levchuk near Mezhyhirya estate has 478 square meters, the ownership of which he designed in 2005.

In the spring of 2016 Levchuk, who worked as a judge since 1992 (first in Vyshgorodsky district court of Kyiv region, then in 1999 became a judge of the Kiev regional court) resigned.

For two with his wife-notary Olga Levchuk he owns land in Boryspil district of Kyiv region and family land in Vyshgorod, with a total area of 0.96 ha. In 2015 Levchuk declared salary 879 thousand hryvnias at the wife and 266 thousand UAH.