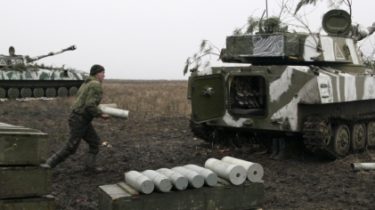 Most attacks during the day, subjected the village of Shyrokyne in Donetsk direction.

The militants did not stop shelling positions of ATO fighters in the Christmas holidays – as of 18:00 Sunday, 8 January, was held on 28 attacks.

In particular, in Mariupol direction militants fired from 122 mm artillery Shirokino with mortars of different calibres fired at Hnutove, Trinity, Water and Shirokino.

On Lugansk the direction fighters covered with fire from 82-millimetre mortars Trinity, and heavy machine guns – the Novozvanovka. At Trinity shot sniper.

On Donetsk the direction, from 82 mm mortars occupants fired at Avdeevka and Luhansk. And rocket-propelled grenades and small arms at zaytsevo and the plant. In Lugansk fire kept enemy infantry fighting vehicles.

Recall that on Christmas day the Russian military fired at the occupied Khartsyzsk , Donetsk region. According to intelligence, there are victims among civilians.