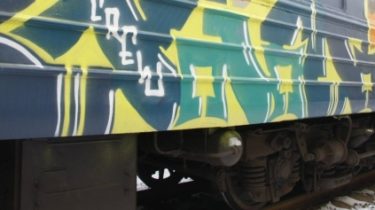 After the attack the doctors had to remove the man’s spleen.

In Kiev, two men attacked and severely beat up the assistant driver of the train, which did not allow them to draw a graffiti train.

About it reported in a press-service of “Ukrzaliznytsya”.

“On 7 January at 17:27 on the platform of “Protasov Yar” haul Kiev-trade, Kiev, Moscow, unknown assailants attacked the assistant to the machinist of an electric train, which reprimanded them”, – stated in the message.

As noted, the incident occurred during the departure of commuter trains Kiev-Yahotyn due to the fact that the man stopped the strangers to put on the train graffiti.

“During the closing of the doors of the trains when the railroad worker walked across the platform to inform the operator about the end of the landing, hooligans sprayed the railroad from a gas canister in the eye, knocked him down and beat feet,” said the company, adding that after that, the attackers fled.

The attack resulted in the railroad was seriously injured, the driver of the train called the doctors, who hospitalized the victim in the oblbol’nitse, where he washed his eyes and removed the spleen.

Separately in the “Ukrzaliznytsia” thanked the passengers who stood up for the assistant engineer during the attack on him.

Now the police investigate the crime.

Earlier, in Mariupol, a drunk bus passenger was beaten by police for comment. The man did not stop even the fact that the police was in the working uniform with identification marks.