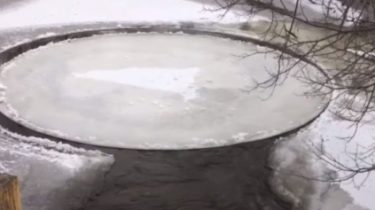 The locals were scared and thought it could be a UFO.

In winter the waters are covered with ice, and sometimes it takes the form of a perfect disk. A unique phenomenon was recently shot by photographer in the United States, reports Thesun.co.uk.

Local residents this phenomenon scared if it could make a UFO.

It was later revealed that the appearance of the pond ice circle requires a combination of several factors: low temperature, a certain flow velocity and the curved shape of the coastline. Under the action of eddy currents block of ice slowly rotating in the water, and its edges are erased when a collision with land.

The earliest record of a similar phenomenon described in 1895. Most often it is observed in Scandinavia and North America, but also saw him in Germany, UK and Russia. The average disk diameter of about 15 meters, and the largest in the history of the ice circle was spotted on lake Baikal: in diameter it reached four kilometers.

The newly frozen ice has adopted a round shape in the area of the city of North bend (Washington).

Photos and videos made Kahlan Messer. Images were taken on time the next day the river had cleared of ice.

Recall that nial a study published in Nature presented a new theory about how in East Antarctica was a mysterious crater. Scientists have found that a two-kilometer crater in Antarctica was not formed because of a meteorite, as previously thought, but as a result of melting ice, the newspaper reports. It is noted that this cavity appeared after melting part of the surface on which there was a lake. Water from the lake and contributed to the fact that began the process of divergence of ice then began to form a crater.