Inflation slowed down to 12.4%: what is the most expensive in 2016. Infographics 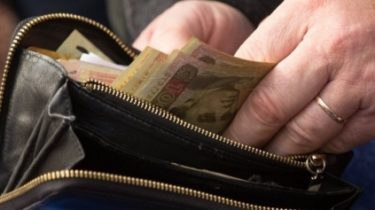 Inflation slowed down to 12.4%: what is the most expensive in 2016. Infographics

Last year’s inflation was the lowest for the last three years.

By the end of 2016, the inflation in Ukraine slowed down to 12.4%. That is, prices still growing, but not at a frantic pace as in 2015 when everything has risen in price almost in half.

“The actual inflation rate at the end of 2016 was close to the forecasts of the National Bank at 12% that were published in the inflation reports from mid-2015. Thus, the inflation target for 2016 is defined by the Strategy of monetary policy for 2016-2020 in the range of 12% plus/minus 3 percentage points, achieved” – said in comments to the NBU regarding the data of the State statistics service.

The national Bank explained that inflation has slowed “primarily because of fundamental factors. This was evidenced by the rapid deceleration of core inflation (to 5.8%). Also significant contribution was moderate price growth on raw food. At the same time the main growth of prices was the increase in tariffs for housing and communal services and increase in fuel prices”.

“The decline in core inflation and overall inflationary pressures contributed to the moderate fiscal and monetary policies, a decrease in the intensity of military conflict in the East, the secondary effects of the factors on the supply side of raw food. So, the role of the discount rate, its weighted down over the years and the efforts of the government on the content of fiscal deficit within the target limits has led to a significant improvement in inflation and exchange rate expectations have kept inflation from the demand side. Lower inflation has contributed to moderate the volatility of the exchange rate of the hryvnia, which was observed for most of the year due to the favorable situation on foreign markets, revenues from exports of high harvest of grain and sunflower oil and measures of the National Bank to smooth excessive exchange rate fluctuations on the interbank currency market”, – said the NBU.

See also: the world Bank updated its forecast on growth of economy of Ukraine

For 2016, also growing prices of imported goods (household appliances, clothes and shoes). However, the price increase was not as intense as last year.

“Some products even cheaper. For example, audio and video equipment and equipment for information processing. Also significantly slowed the growth of prices for food products with a high degree of processing, which is associated with secondary effects from lower inflation raw food”, – stated in the NBU.

The regulator says that in the autumn the fall in the level of inflation has slowed.

“After the sequential slowdown in inflation, for the most part, 2016 October the disinflationary trend is somewhat slowing down due to a number of factors. First, due to the cost of individual commodities, namely milk. Secondly, due to the deterioration of inflation expectations against a backdrop of increasing political tension, devaluation pressure and the government’s decision to sharply increase in early 2017, the minimum wage (twice – up to 3,2 thousand UAH)”.

“This was influenced by a number of factors whose effect was more powerful and more prolonged than expected. In particular, we are talking about the high yields in Ukraine – cereals, vegetables and some fruit (in particular apples), and in other countries citrus. So, the price of borsch set vegetables decreased to 43.1%. In addition, the trade policy of the Russian Federation in respect of Ukraine (the food embargo from the beginning of 2016), and other countries provided the highest offer of food products on the Ukrainian market. For example, trade sanctions of the Russian Federation on the supply of certain agricultural products of Turkish origin has led to the increase in the supply of fruit and vegetables on the market of Ukraine and, accordingly, reduction of prices, particularly tangerines and oranges, tomatoes and cucumbers”, – explained in the national Bank.

Meat prices increased rather reserved due to restrictions on the export of pork and chicken due to an unstable epizootic situation. At the same time in 2016 rapidly increased prices for milk and dairy products amid increasing demand from refiners due to the high volume of exports of dairy products.

Prices and tariffs, regulated administratively, in 2016, rose by 34.6% in annual terms. Although the increase was significantly lower than last year (64.4 per cent), it was the main reason of growth of consumer prices in 2016. In the past year has seen the continued increase of tariffs for all types of housing and communal services. Has also continued to increase prices on tobacco products and alcoholic beverages, including by raising excise taxes, minimum prices on alcoholic drinks as well as the pricing policy of manufacturers of tobacco products.

Prices in 2016 increased by 19.5% (in 2015, it was 12.3 percent). The acceleration of price growth reflected the rise in oil prices on world markets and a moderate devaluation of the hryvnia, said the NBU. 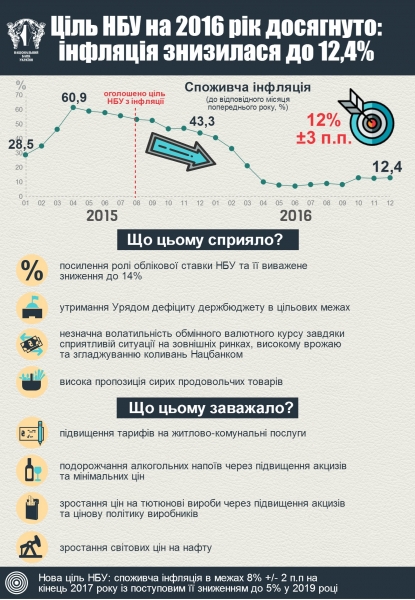