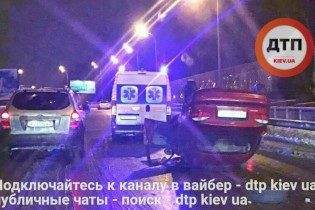 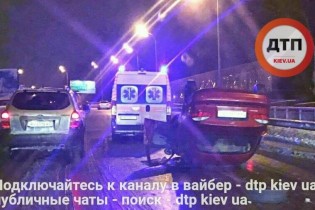 On-site work by the police and ambulance.

In Kiev there was an accident with victims in the race for the Darnytsia bridge.

From the metro bridge overturned Daewoo, there are victims.

On-site work by the police and ambulance.

See photos: Terrible accident in Lviv took the life of one person, two more were injured

We will remind, in Zaporozhye flew off the road and overturned car with 11 prisoners. According to the Protocol of the patrol, who were working at the scene, the cause of the accident was a violation by the driver of the speed limit under adverse road conditions.

In the capital there was a fatal accident

On the Avenue Komarova, the car took off on a bump. From blow it was flattened and ripped in half, and the driver tore the clothes and shoes. Rescuers and law enforcement officers arrived on the scene in a few minutes, and for such a hit – they could only plan to get the body, and the utility a few hours removed from the road are the remains of the car. The cause of the accident the law enforcement agencies is still set.