Poroshenko explained the incident with the Odessa official 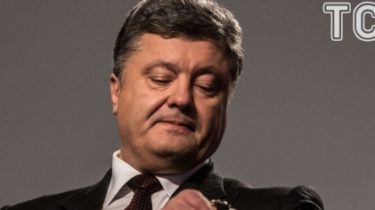 Poroshenko explained the incident with the Odessa official

The head of state sharply interrupted the servant.

President of Ukraine Petro Poroshenko said that the official tried to interrupt him during the presentation of the new head of the Odessa regional state administration Maxim Stepanov to find out the issues of violation of the electoral legislation in one of the communities.

“The head of the district state administration, who raised his hand in the hall and approached me. It came to the question of violation of the electoral legislation in one local community in elections. I instructed law enforcement agencies, set a timeline…”, – UNIAN cites a quote Poroshenko.

As previously reported, during the presentation of the new head of the Odessa Chapter of the state suddenly interrupted and turned to the official who raised his hand: “put your hand Down. Are you all right?”

He spoke with the officer in a rather sharp form.

“Then when you’re President I will invite you and you play instead of me… Sorry, I to you yet did not give the word. You are appointed by a decree of the President please be seated. If you want to report to the President any information, I give you this opportunity, sit down,” he said.

After the incident, Poroshenko invited the official to talk to.