Wife wounded in Krasnogorovka men: What’s he done in front of Donetsk? 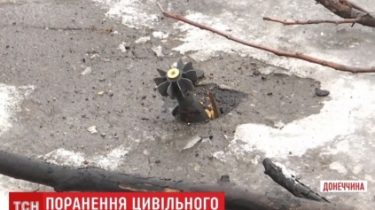 Wife wounded in Krasnogorovka men: What’s he done in front of Donetsk?

The victim was rescued by the police.

Residential quarters of frontline Krasnogorovka last evening militants fired. Just in the yards and on playgrounds flew a few min from the automatic 82 mm mortar rounds, according to a story TSN.19:30.

Fired at the occupants of locality and anti-aircraft installations. One of the shells from the “flak” flew to the apartment of the building, which is located in the heart of the city. In the house were already sleeping wife. Man shell wounded foot, he was rescued by the police before the ambulance came. The guys carried the wounded from the fifth floor and was taken to the hospital in Kurakhovo. “I saw the blood. Did not have a harness – removed the belt, tightened the leg. All the trite,” the detaching from the heroic glory of the policeman Artem Sushi.

Just in the yards and on playgrounds flew a few min with automatic 82-mm mortar. Shot the occupants at the settlement, and anti-aircraft installations. One of the shells from the “flak” flew to the apartment of the building located in the heart of the city. In the house was asleep spouse. Man shell wounded foot.

Much more emotional a situation is commented by the wife of a wounded Elena Panchenko. “I hear Bang! Jump – the glass flew. Turned on the light, I hear he yells Out… Zakharchenko says he is a miner. Yes how can he?! My 21 year has been what he’s done to Donetsk?!”, – she was outraged.

As reported, the wounded was 66-year-old man. The chief police of the Donetsk region Vyacheslav Abroskin said that if law enforcement officers did not deliver the wounded to a hospital in time, the man could die from blood loss. In the ambulance service the wife of the victim could not get through, and it is therefore called the police. “And one of the paradoxes of this war – a victim’s daughter lives in the Russian Federation, and son – in-law serviceman of the Russian Federation”, – said Abroskin.