In Kiev will start another night trolley 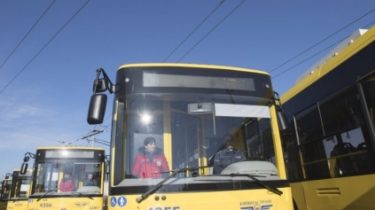 In Kiev will start another night trolley

According to the capital’s transport, Kiev actively use night buses, especially in Troeshchina.

In Kiev will start a new trolley routethat will connect the city center and Obolon.

About it the General Director KP “Kyivpastrans” Dmitry Levchenko wrote on his page in Facebook.

“Plans call for the introduction of one more night trolley route, which will connect the Independence square and the street of the North”, he said.

According to Levchenko, in the development of night routes there is a positive trend.

“The results of the two weeks of night routes KP “Kyivpastrans.” In General, we carried 3731 passenger, and this week – more than 2,200 passengers,” – said General Director of “Kyivpastrans”.

Separately Levchenko noted that the most popular trolleybus route No. 91Н, which connects the residential area Troyeshchyna to the Central train station.

We will remind, in Kiev launched a public night service – three trolleybus or bus, which run from 23 in the evening until six in the morning with traffic intervals in one hour. They can be reached from the center in four sleeping district of the capital – in Troeshchina, Vinogradar, Russia and Kharkov array.