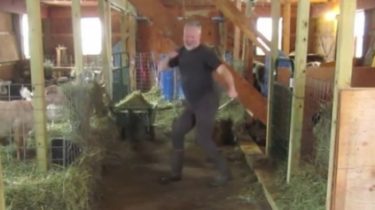 A farmer from the United States J. Laver showed a video of their magical dances while cleaning in the barn for goats – roller in a few days scattered in the Network.

American of the small village of Sharon springs in the South of the state of new York admitted to The Huffington Post, which frequently makes “crazy stuff” on the camera, but doesn’t normally publish video shared, and shared only with friends. This time Laver departed from the usual rules and showed everyone how dancing in the barn. The man in the video takes very plastic and fire moves and even throws off the clothes.

See also: Dirty dancing and sausage on his chest. In Russia undertook to check the alcoholic party in the school pool

Now the farmer is really the star. His video has been viewed nearly 5 million people and liked by over 50 thousand.

Earlier, the Reuters news Agency showed a fascinating photo with a Chinese circus dancerthat is in easy new costume dancing on hangers attached to the wood.