The attack of the enemy in all directions and a wounded Ukrainian soldier. Digest ATO 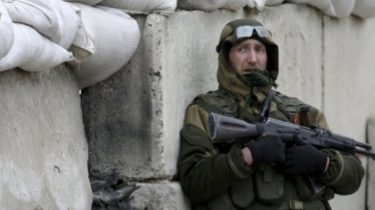 The attack of the enemy in all directions and a wounded Ukrainian soldier. Digest ATO

On Lugansk the direction the Crimean fired by a sniper.

Occupation forces continued attacks on Ukrainian positions in all directions.

In the direction of Donetsk – Luhansk, Northern, Zaitseva Avdeevka – from grenade launchers and small arms.

Lugansk – the Crimean fired by a sniper.

Overall, there have been 17 attacks.

Read also: Militants have given the bodies of three Marines killed near Mariupol

Earlier, the OSCE mission published a video shot from a drone, as militants fired Ukrainian military positions on the arc Svetlodarsk. The terrorists used a banned Minsk agreements howitzers and fired 31 shells.

The OSCE considered the facts of militants with heavy artillery

The UAV mission has detected the battery was shot from Novohryhorivka in the direction of Svetlodarsk. While the drone was in the air, the occupants fired at least three dozen shells. During the day the headquarters of ATO recorded 78 attacks, three soldiers were injured.