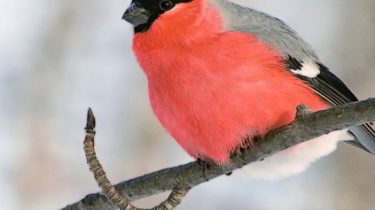 Birds you can buy and order in the market or on the Internet.

The capital returned bullfinches, bragging Kiev in social networks. Ornithologists explain that the bird does not actually disappear, but simply did not want to seem, because had enough food, according to a story TSN.19:30.

One of the birds photographed from Kiev Galina Zadvorny troyeschina. Beautiful bullfinch eating Rowan to the delight of all in the yard. “It was not eight years old. 18 bullfinches three days sitting on the mountain ash until I ate the last berry, they’re in the forest flew away,” – said a resident of the capital.

The return of the bullfinches: how much you can buy the red-bellied pet

“In the capital returned bullfinches!” such messages in social networks boast of the people of Kiev, who managed to see the red-breasted birds. Ornithologists explain that the bird is not actually disappeared, just didn’t want to be because they had enough food. As it turned out, bullfinch, you can even acquire custom-like pet.

Employee of the capital’s zoo Vitaly Lischewski 35 years of his life devoted to birds and knows their habits. “Bullfinches only in the very cold can enjoy,” he says. The ornithologist says that the birds have not disappeared, just people they don’t really need it: if the year is fruitful, then they are well fed and without flights to visit the city.

During the undeclared Russian-Ukrainian war red-and-black braid with blue and yellow Tits have become symbols. Bullfinches even ranked as the ultra-right birds, although the Russian propaganda tried to convince that Ukrainians supposedly destroy them through hatred of Russia. This caused a surge of jokes and creative figures in Ukraine. At the same time to buy a Snowbird, not for eating but as a pet, never had a problem: a bird on the Internet asking for 100 UAH, and from under the counter and sell in the markets in saoradh.