The attacks of militants from infantry fighting vehicles and heavy weapons and one wounded Ukrainian military. Digest ATO 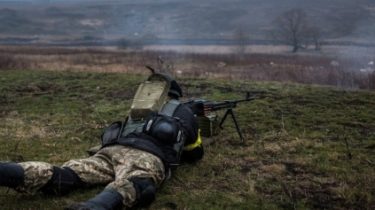 The attacks of militants from infantry fighting vehicles and heavy weapons and one wounded Ukrainian military. Digest ATO

There had been 62 fire over the past day.

Over the past day in the area ATO in General militants carried out the shelling 62. A Ukrainian military wounded. This is stated in the summary of the press center of staff ATO.

At the direction of Lugansk from artillery 152 and 122 mm Russian occupation troops fired on the Novozvanovka and Trinity. Novoaleksandrovka, Novozvanivka, Valuyskiy and Old Aydar – of the 120 and 82 millimetre mortars. From grenade launchers and small arms, the occupants fired at our positions near the village of Lugansk, Novozvanovka, Valuyskiy. On the Crimean fire kept the sniper.

We will remind, earlier it was reported that the militants have given the bodies of three Marineswho were killed near Mariupol.