Trump announced conditions for the lifting of sanctions against Russia 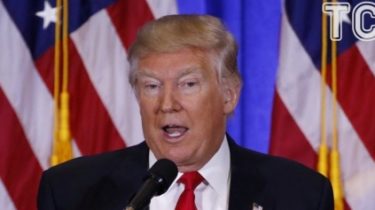 Trump announced conditions for the lifting of sanctions against Russia

He is willing to meet after the inauguration with his Russian counterpart Vladimir Putin.

The US President-elect Donald trump said he intends to keep at least for a certain period of sanctions against Russia, imposed by his predecessor Barack Obama, however, made their abolition in the case of successful cooperation with Moscow.

This writes The Wall Street Journal.

Trump noticed that you can cancel anti-Russian sanctions imposed by Obama in late December in response to the occurring attacksif Moscow will assist in the fight against terrorism and other tasks. Like, why do we need sanctions if you do great things.

Elected President of the United States also expressed its willingness to meet after the inauguration with his Russian counterpart Vladimir Putin.

See also: a Threat to U.S. national security and sovereignty of Ukraine, Obama explained why extended sanctions against Russia

Previously, us leader Barack Obama promised that the United States is not limited to publicly announced sanctions and will continue to take various measures against Moscow.