Russia is a priority threat to the United States and Ukraine. Poroshenko made the statement after meeting with Biden 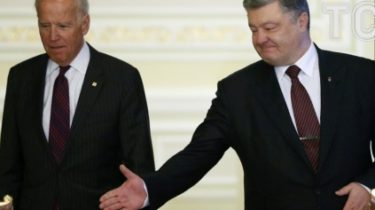 Russia is a priority threat to the United States and Ukraine. Poroshenko made the statement after meeting with Biden

The President assured that Biden will always be welcome even after the abdication.

Today, January 16, in Kyiv took place the meeting of President of Ukraine Petro Poroshenko and Vice-President of the USA Joe Biden, who will soon resign.

Following the meeting, Poroshenko made a statement in which he thanked Biden for their invaluable help in the protection of Ukraine from external aggressors and considerable support, which Vice-Premier gave our country over the years.

The President noted that he hopes for fruitful cooperation with the new administration and the fact that its position on the need to put pressure on Russia will not change.

Read the President’s statement in full:

“I am delighted to welcome a great friend of Ukraine and my friend Vice – President Joe Biden.

You are a true friend of Ukraine, which since the time of the revolution of Dignity, the time of the Maidan, did a lot for tangible progress in our fight both internal and external direction. Thank You sincerely for it.

Your visit to Ukraine is very symbolic step. He gave us the opportunity to summarize the heroic way, which is Ukraine, and we had to go through in recent years. And this way is truly impressive.

Without reform processes that are daily changing the face of our state is impossible to imagine a new Ukraine. I want to emphasize that we work as a team: the President, Parliament, Government and our strategic partners in the United States of America, the European Union and worldwide in the framework of a powerful Pro-Ukrainian coalition, which was created including your efforts, Mr. Vice President.

Decentralization, which already has been successfully implemented and yields results. Judicial reform, where we have made changes to the Constitution and are now completing the formation of a new Supreme Court, which implements the right to justice. This is a new tax, administrative reform, these are powerful steps that provide stability in the macro-financial and banking sectors.

For a short period of time, stress, aggression, war, illegal annexation of Crimea and occupation of the country East of us, and it’s not only my not only internal, has done more than all previous time of existence of Ukraine.

I would therefore like once again to Express my sincere words of gratitude – gratitude for the advice, thanks for the help, good friend, Vice President Biden and the current administration of the United States of America and look forward to continuity in our joint work with the new U.S. administration.

During today’s talks we will, of course, considered the question of Russia’s aggression against Ukraine. This year marks three years since Russia has unleashed a real war against our country. This war, which killed ten of thousands of Ukrainians – both civilian and military. This war continues today. Only in the last three days of our military continued to fire more than 250 times. Ukraine is aware that we are not the only enemy for Moscow. All who profess democratic values, are enemies of the Kremlin. And so today, the protection of Ukraine is the protection of values and the free world.

Threats remain. Russia seeks to avoid responsibility. It is, to offset military setbacks, is trying to destabilize the internal situation in Ukraine, to provoke disorder. It aims to split the TRANS-Atlantic and European unity. And in our power to oppose these plans. And the first place by starting the road map of implementation of the Minsk agreements and at the same time a continuation of the successful internal reforms.

Would like to thank Mr Vice-President of the US for an absolutely clear and consistent position on this issue and the recent decision by Washington to extend sanctions against Russia. Emphasize that these sanctions should remain in force until the restoration of territorial integrity of Ukraine within its internationally recognized borders, including the Crimea. I believe that we will win because truth is on the side of Ukraine, and justice is always stronger than arms.

Today we also had a detailed exchange with Mr Vice-President of the United States of views on ways to further development of us-Ukrainian strategic partnership. We respect the democratic choice of the American people and is ready for effective and fruitful cooperation with the new Administration. Ukraine has always enjoyed (support – ed.) and I felt it, Mr. Vice-President, in the Congress of the United States during opportunity to speak to congressmen and senators in 2014. Emphasize that Ukraine continues to have bipartisan support from the U.S. Congress, the Administration and the American people. We appreciate this support and sincerely look forward to it (further – ed.). I hope that in the future the Ukrainian issue will be to unite the whole of American politics and will remain among the first priorities. Congratulations to the first encouraging signals delivered during the Senate hearings of candidates for Secretary of State and Minister of defense.

Yes, the current aggressive Russia is a priority threat for both the United States and Ukraine.

Yes, Russia invaded Ukraine, occupied part of the Donbass and the Crimea. The Crimea is Ukraine. And we are grateful that representatives of the new Administration’s clear stand on these positions.

Yes, the sanctions are not an end in itself, but an important instrument of pressure, influence and motivation for the Russian Federation to be at the negotiating table, to implement the Minsk agreements, to stop the aggression and occupation and to ensure the territorial integrity of our state within the framework of international law. It is a tool of influence in order to respect international law by Russia.

Yes, the responsibility before partners and allies is a very important feature of the US as global leader, they have always been there and I am sure will remain.

In conclusion, I would like to say the following. Dear Joe, this is your last visit as Vice-President of the United States, but certainly not the last visit as a good and reliable friend of Ukraine and the President Poroshenko, my personal. Activity, richness and openness of our dialogue is very effective. Dozens of hours of our phone conversations and numerous personal meetings – it was a very difficult but very effective process of finding the right solutions that greatly accelerated the progress of reform, on which depended life or death, sometimes the fate of the country and millions of its citizens.

Mr. Vice-President, I feel boundless gratitude and pride that I had the great honor to be with you during these times. Together to make history, the success story of the largest country in Europe. Obtained in this experience is invaluable. We have much to be proud of.

Thank you all for your attention.

And thank you in person, Joe”