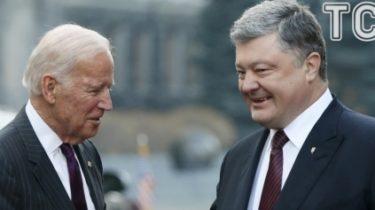 The Vice-President also stressed the importance of the introduction of electronic declarations.

Vice President Joe Biden stressed the importance of continuing to strengthen the newly established anti-corruption bodies in Ukraine to eradicate nepotism and kleptocracy.

He said this at a joint press conference in Kiev with Ukrainian President Petro Poroshenko, UNIAN reports.

Biden stressed the importance of introducing electronic declarations and noted that the NEB and Specialized anti-corruption Prosecutor’s office ensure the efficiency in the fight against corruption, when “they they have the resources”.

See also: Biden held a meeting with Volodymyr Groysman. What the Prime Minister promised the Vice-President of the United States

“You have entered an innovative system of electronic Declaration of assets to the fight against corruption, which helped to ensure that officials could not use their political positions for personal enrichment,” – said Biden.

Biden also noted that strengthening anti-corruption institutions need to be eradicated from the Ukraine the rule of nepotism and kleptocracy.

“It is important that you continue to strengthen all anti-corruption institutions to eliminate all those who can to return Ukraine to the domination of nepotism and kleptocracy,” – said Biden.

We will remind, Vice-the U.S. President Joe Biden also said he hoped that the administration of the elected President, Donald trump will support Ukraine. However, he noted that “no one else can do the hard work, in addition to the Ukrainian people.”