In “LNR” began to release his “Daisy” with harmful additives 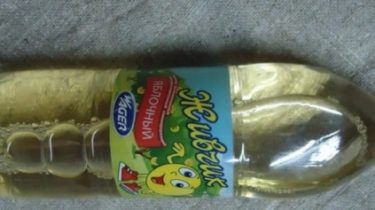 In “LNR” began to release his “Daisy” with harmful additives

Producers on the label written “Made in LC” placing Ukrainian barcode.

It is reported by Informator.media.

On the label of a fake provided that it includes Apple juice (in the original drink contains 10% Apple juice, how many “Enrosca” – unknown). Besides, unlike the original prescription, it does not contain Echinacea extract.

Luhansk Ukrainian version of the famous drink contains the sweetener aspartame, which is contraindicated in patients with phenylketonuria.

The label even has a warning about what to eat drink children under 7 years not recommended.

We will remind, fighters feed the inhabitants of Lugansk bread of grain for the animals. The activist stressed that the low price of bread due to the fact that its production is used for wheat 5-6 class, which, according to self-proclaimed Minister “of the Ministry of agriculture” Sorokovenko, is about 70% of the harvested crop.