The rebels were beaten by Trinity, and on the Shirokino shot sniper. Digest ATO 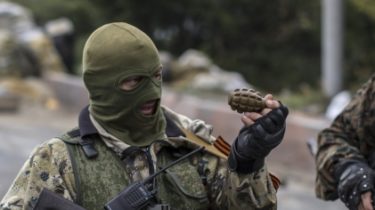 The rebels were beaten by Trinity, and on the Shirokino shot sniper. Digest ATO

On the Mariupol direction the Russian occupation troops from the 82-millimeter fired at Shyrokyne.

From grenade launchers and small arms – Lebedinsky, Water, Hnutove and Shyrokyne from the armament of the BMP – Birch.

At Shirokino fired by a sniper. On Lugansk — 120 and 82 mm mortars fired at Trinity.

On Donetsk the direction from grenade launchers of various systems of small arms and light weapons invaders fired at Avdeevka and Opytnomu.

See also: near Mariupol there was a firefight between militants

Recall that the militants want to be excluded from the Minsk process , the Vice-speaker, the representative of Ukraine in the humanitarian sub-group of the trilateral contact group Irina Gerashchenko.

What ended the first talks in Minsk in the New year

The militants refused to free hostages and block the negotiation process. About it on the social network wrote to the representative of Ukraine in the humanitarian sub-group of the Trilateral contact group Irina Gerashchenko. He says despite the promise of the new year holidays to let teenagers whom militants accused of sabotage, they are still kept in jail. This is despite the fact that Ukraine willingly unilaterally on the eve of passing 15.