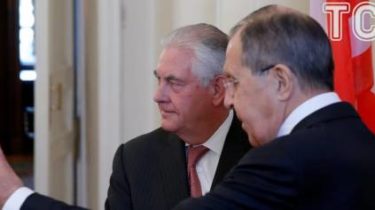 Vrezannymi from the meeting is divided to Reuters.

The official route Tillerson in Moscow began with a meeting with Lavrov in the hall of the Ministry of foreign Affairs. In his introductory remarks, Lavrov congratulated Tillerson icy remarks, speaking about the missile strike on Syria.

Also before the talks Lavrov and Tillerson, a senior Russian official pointed to the “primitive” and “rudeness” of American rhetoric. “We hope that this will not be the substance of American policy,” said Deputy foreign Minister Sergei Ryabkov.

Strong support: the state Department said about the position Tillerson on Ukraine at talks in Moscow

Tillerson has behaved more diplomatically and calibrated responded to the comments of the Russians. They say, differences in policy exist, but it should be understood, what are the prospects for narrowing these differences.

“I look forward to a very open, Frank exchange that we might better define us-Russian relations,” said Lavrov.

Lavrov commented on the “ultimatum” from Tillerson

We will remind, Tillerson urged the Russian Federation to decide who she wants to be an ally with America or the regime of Syrian President Bashar al-Assad, Iran and the Islamist organization Hezbollah. Reported by the Associated Press.

Tillerson noted that it is unclear, frivolous Russia took its commitment to rid Syria of chemical weapons or was just incompetent. According to Secretary of state, the distinction does not matter much to the dead.”

Earlier the journalist of “voice of America” Steve Herman reported that the meeting with Putin gone from the schedule Tillerson’s state visit to Moscow. Yesterday evening, Peskov said that Russian President Vladimir Putin will not meet with Tillerson on April 12. He did not say why Putin had not planned to meet with Tillerson.

This move may indicate a growing tension between the US and Russia after the Americans launched a missile attack on the Syrian air base in response to a chemical attack the Syrian government on 4 April in the town of Khan shaykhun, in which killed and injured hundreds of innocent Syrians, including women and children.

On the eve of visit to Russia Tillerson spoke by phone with Ukrainian President Petro Poroshenko.