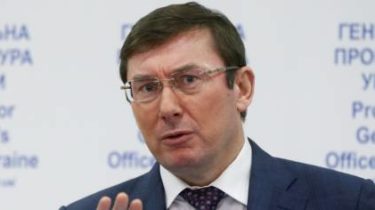 The Prosecutor General of Ukraine Yuri Lutsenko in Ukraine, was presented the new Prosecutor of the region.

This was reported by press Secretary of the head of the GPU Larisa Sargan on the page in Facebook.

“In this post Bogdan Polubinski replaces Oleg Sable, which order transferred to Chernivtsi region”, – she wrote.

According to Sargan, introducing the new head of the regional Prosecutor’s office, Lutsenko said that there was a “technical replacement” because of the Chernivtsi oblast at the present time requires a serious fight with the local mafia.

“The situation there is critical. Chernivtsi oblast needs in order. Primarily, this is due to smuggling and export of forest. In fact, smuggling exists in many fields, such open but I have not seen even in Odessa or Kharkiv region. So I decided to send Mr. Sable in Chernivtsi. I think that all will confirm that during this time it has not been comments from the point of view of decency” – he stressed.

Lutsenko assured that Sable cope with the challenges that he put in Chernivtsi smuggling.

“The new head of the Rivne regional Prosecutor’s office strong-willed, I know how it works. In the Rivne region now resolved the situation with the extraction of amber. The new leader will continue to work in this direction”, – said the Prosecutor General.

Earlier, Lutsenko fired the controversial former Prosecutor, a senior investigator for particularly important cases of the Main investigation Department of the Prosecutor General, Dmitry Sousa. According to sources, he was fired for concealing the state in their declarations, as well as for the systematic violation of several laws and the rules of prosecutorial ethics.