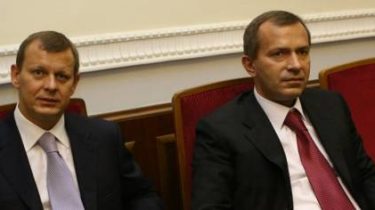 Kyiv appellate economic court of 6 April overturned the arrest of 121,8 million UAH on the accounts of three companies , the brothers Andrey and Sergey Klyuev.

This is stated in the relevant resolution of court.

According to court records, their claims “Ukrsotsbank” justifies the debt of JSC “Factory of processing non-ferrous metals” under the credit agreement dated 5 April 2013, porucnika which were the other two companies.

Justifying the request for seizure of funds of defendants, “Ukrsotsbank”, among other things, pointed out that “the Factory on processing of nonferrous metals” is a party to litigation for disputes about the recovery from him of substantial sums in favor of other creditors, in particular, in the case on the merits “Prominvestbank” 161,6 million.

However, the Board of the Kyiv economic court of appeal disagreed with this argument, noting that he is only the fact of excitation against defendant court cases on claims of different legal entities is not indicative nor that he has a difficult financial situation, or the fact that these claims will be satisfied or that plant, even in case of satisfaction of all claims, including this one, will not be able to execute decisions of the courts.

The court noted that in addition to the guarantee, the debt commitment of OJSC “Zavod po obrabotke tsvetnykh metallov” secured by a mortgage and pledge of a building of shop on production copper rod in the Donetsk region and the land beneath it with a value of 35.8 million; personal property value of 72,8 million UAH; other property rights.

According to NSSMC by the end of 2016 the owner of 38.1% of shares of JSC “Plant for processing of nonferrous metals” was JSC “Ukrpodshipnik”, the ultimate beneficiaries of which are the brothers Sergei and Andrei Klyuev.

As you know, brothers Klyuev declared in the international search. The former head of the presidential administration Andrey Klyuev is one of the suspects in the beating of participants of Bramidan, there is evidence that he is in Russia. Verkhovna Rada Deputy, ex-“regional” Sergey Klyuyev held on several Affairs, including with respect to fiddling with the decorations of the residence of Yanukovych in Mezhyhirya.

We will remind, the government is trying to return purchased by brothers Klyuev of the land in Koncha Zaspa near Kiev, but the process is moving slowly. For three years after the revolution of Dignity, with more than 5 hectares of forest managed to seize only 40 acres.