“Ukroboronprom” boasted results of repair of the T-64. The before and after photos 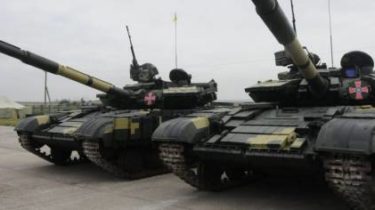 State concern “Ukroboronprom” showed a photo of the T-64 after a major overhaul.

It was the work of “Kharkov armored plant”, part of the concern. Experts have restored the power plant and systems operation, components and assemblies of transmission, protection systems, complex weapons, including managed.

“Ukroboronprom” has told, how many weapons and equipment conveyed to the Ukrainian army in 2016

The results can be evaluated on a comparative photo of before and after – to do this, simply drag the ribbon.

“Ukroboronprom” noted that military equipment APU is repairs or a full restoration after years of storage under the open sky. It is noted that the armored plant in Kharkov in 2016 repaired more than 60 tanks.

Earlier, the “Ukroboronprom” showed how to check the tanks after repair “Kharkov armored plant”. After them the military equipment sent to the armed Ukrainian army.