Case Martynenko will continue to consider a controversial referee 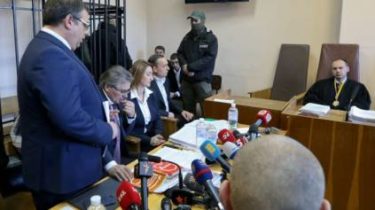 In the Solomensky district court of Kyiv continues consideration of the case the people’s Deputy Nikolay Martynenko.

Lawyers said the disqualification of judge Alexander Bobrivnyk, accusing him of “interest in making unjust decisions”.

However, the court decided that no grounds for removal bobrovnikova.

“To deny the claim, the complaint is not subject to appeal”, – is spoken in the decision.

Now begins the main proceedings, is expected to remand.

The scandalous referee Bobrovnik decide whether to replace themselves in Martynenko

Aghdam, 20 APR detectives NABOO and SAP prosecutors arrested two people —former Deputy Mykola Martynenko and his accomplice Sergei Fracture on suspicion of forming a criminal organization and of misappropriation and embezzlement of property per SE “VostGOK” damages in the amount of 17.28 million dollars. The detainee it is reported about suspicion. Now the issue of election of a measure of restraint.