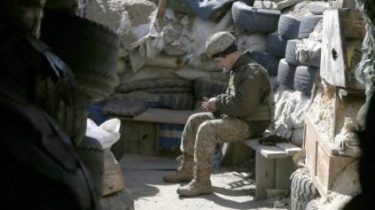 For the past day, April 23, in the area of ATO in the Donbas the militants 34 times fired at positions of the Ukrainian military. Killed one Ukrainian soldier, another two were injured.

On Donetsk the direction of fire of 120-mm mortars and 82 mm grenade launchers of various systems and heavy machine guns, the militants covered the positions of Ukrainian troops in the area of Trinity. The defenders of the Town was hit with 120-millimeter mortars, anti-tank grenade launchers and machine guns of large calibers. The soldiers near the Sands, Luhansk and Novoselivka Druha fired 82-mm mortars and grenade launchers. Strongholds of Ukrainian units under the Butovka mine and Nebelsick fired rocket-propelled grenades, heavy machine guns, and near Zaytsevy – from small arms. In addition, the Ukrainian soldiers near Luhansk was beaten from APCS, and in the vicinity of the Town were active militants snipers.

Hg said, who needs to make a decision on a military mission of OSCE on Donbass