The OSCE launched an investigation into the car explosion in Luhansk 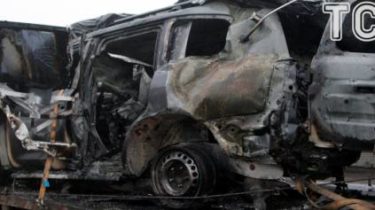 The OSCE launched an investigation into the tragic incident with the explosion the vehicle Special monitoring mission and the death of a staff member and waiting for assistance.

This was said by Secretary General of the organization Lamberto Zannier, writes UKRINFORM.

He stressed that the security of the OSCE observers carry the responsibility of “all parties” that the mission must have full support, all you need to protect observers from danger.

The Secretary General of the organization shocked the first case of death of the member of the SMM during the execution of official tasks. “This terrible incident confirms the increasingly dangerous conditions of security in which the SMM monitors work daily,” he said.

Chairman of the OSCE, Austrian foreign Minister Sebastian Kurz added that the mission “is too often hampered by threats, restriction of access, dezinformatsia or destruction of its technical facilities” and called it “simply unacceptable”.

Kurtz urged to carefully investigate the details of the tragedy, and all who have influence on the ground – to perform obligations to ensure the security of observers.