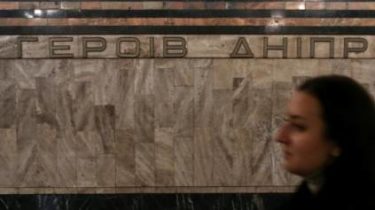 In Kiev unknown persons have warned about the threat of explosion at metro station “Heroes of Dnepr”.

“The police anonymous message was received at around 14:35. According to anonymous, the explosion must occur at the metro station “Heroes of Dnepr”, – stated in the message.

As militiamen noted, the station was evacuated and closed her entrance and exit, all passengers exit at the metro station “Minsk”, “Heroes of Dnepr” trains are in transit.

“As of 15:45 the test is complete, no dangerous objects were found. The station resumed work. Police are searching for a good sense of humor,” added later to the police.

Currently, law enforcement officers solve the issue of opening of criminal proceedings, establishes the identity of the anonymous.

We will remind, similar incident has occurred on Saturday, April 25. The message about “mining” closed station “Heroes of Dnepr”. However, the police did not find explosives.