Luxury fleet of the KSCA. Journalists have found out how the officials use official cars 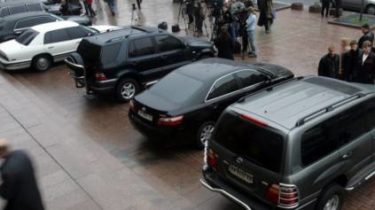 In the city center at the entrance to the Kiev state administration for the blue little box with security guards located almost the most mysterious Parking among government agencies, where I stop only luxury vehicles, says the plot of the program “Groshi”.

It is located in the courtyard of the KSCA, and seem to intentionally completely hidden from prying eyes.

At the same time, outside the building there is one Parking for official cars. According to the administration, in 84 Park cars, most of them Toyota’s “Camry”, among others Mercedes, Hyundai and even ZAZ.

For each of the departments, depending on its specific features, fixed a few cars with specific numbers. Therefore, employee administration permission to take the car should give the Chairperson or Deputy of the relevant Department, which control the intended use of the vehicle.

However, the officials dispose of the machines at its sole discretion. The journalists of “Pennies” was removed, about the hour of the day with a closed Parking left a black Toyota with numbers АА8022АА that are assigned to the first Deputy chief of staff of the Executive body of the KSCA bacterium by Andrei Alexandrovich. In a few minutes the car stopped near a luxury restaurant, where the official was almost an hour, and came out with some man, and together they went again to the KSCA.

Another official in the middle of the day on assigned JSC “Kyivmiskbud” drove to the gym, a monthly subscription which is worth at least 2 thousand dollars.

In turn, the car assigned to the Control and analytical support for the Deputy mayor of FPGA Gennady Vladimirovich, for some reason, provided the movement of the city to an unknown woman with packages.

In the underground Parking which serves the utility of ATP “KCSA”, a few years ago won the tender, claim that there is no closed no Parking, and in front of the administration organized General, where can money to call anyone.

As one of the drivers of the Department of information and communication technologies, Kyiv city state administration, the day he drove more than 100 km, but journalists are not counted even 50. Moreover, the car is critically low.

Note, only in 2017 on the service cars for officials allocated nearly UAH 21 million, and those who had to inspect the use of official cars, do them and go. Moreover, recently the city administration announced a tender for the purchase of 15 vehicles worth nearly 8 million.