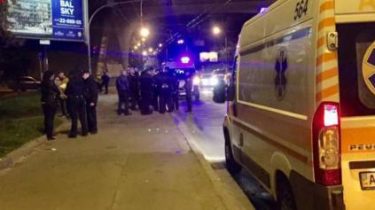 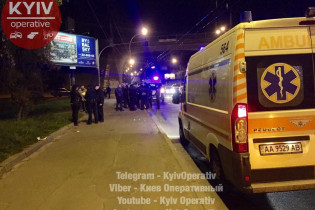 The conflict in the center of Kiev the night before ended with a fight and shooting. Witnesses say that the cause of the showdown between the six men could be a woman, says the story TSN.19:30.

“With them he was not, he ran some guy in camouflage and began to shoot indiscriminately. And then took out a pepper spray and started to sprinkle,” said Maxim socks. At the sound of gunfire began to look out the inhabitants of the nearest house, which caused police and physicians. The police Department took two unharmed people involved in the incident to clarify the circumstances. “On the basis of drinking alcoholic beverages, there was a certain conflict which escalated into a fight. During the fight one of the persons used the traumatic weapon and wounded three people. Currently, criminal proceedings on part 4 of article 296 of the CCU, namely on the fact of hooliganism with use of weapons”, – said the head of the Obolon police Department Michael Nikonov.

Three of the wounded were taken to the hospital. However, one of them immediately disappeared from the facility, and two more were discharged by lunchtime Wednesday. Looking for a shooter so far.