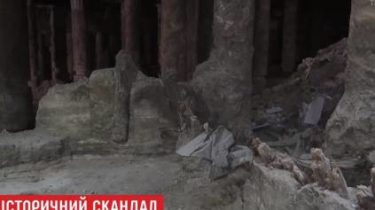 Archaeologists discontinued excavations at the Postal square from-for debts under the salary. In the absence of professional research papers accidentally found the quarters of the TWELFTH century are flooded with garbage, says the story TSN.19:30.

Historical discovery is at a depth of 5-6 meters from the level of modern Kiev. Excavated only part of the old streets. Perfectly preserved aqueduct, protective structures and even a wooden staircase that then the townspeople went down to the river pochayna. A few years ago to allocate money to the study and preservation of identified archaeological treasure promised by the then Minister of culture Vyacheslav Kirilenko, and the mayor of Kiev Vitali Klitschko.