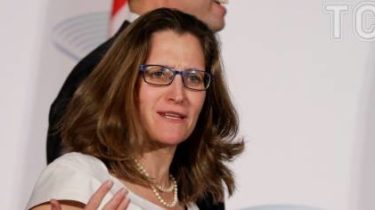 Canada fully supports the right of Ukraine to defend its territory and sovereignty.

This was stated by Minister of foreign Affairs of Canada Chrystia Freeland, writes UKRINFORM.

“Our position on Ukraine is very hard: we are convinced that Ukraine has a full right to self-defense, in defense of their own sovereignty,” said Freeland.

“We unequivocally condemn the invasion and annexation of Crimea and Moscow’s support for separatists in the Donbas,” – said the Minister.

According to her, Ukraine enjoys significant support among developed countries.

“Ukraine has considerable support not only from Canada but also from our allies in the Big seven,” concluded Freeland.

Recall that observers of the OSCE SMM needs to get full and safe access to all conflict areas in Ukraine after the explosion of a car organizations in the Luhansk region.

This was stated by Minister of foreign Affairs of Canada Chrystia Freeland.

She added that the incident should be investigated, and all responsible to be punished.