Fire in reply, and five other wounded fighters of VSU. Digest ATO 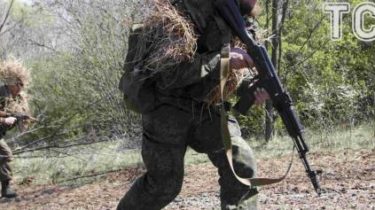 Fighters continue attacks of positions of forces ATO. Since the beginning of the day, the enemy 31 times opened fire on strong points of the APU.

On the seaside direction fire of mortars 120-mm and 82-mm anti-aircraft installations ZU-23-2 and grenade launchers of various systems covered the enemy strongholds in the area Krasnogorovka. From APCS, anti-tank grenade launchers, heavy machine guns and small arms beat at the marine Photinia near Pavlopol and Water. Marines near Shirokino fired from APCS and armored personnel carriers. Machine guns of large calibers shot at Oboronna Gotovogo.

At the Lugansk direction with a 120-millimeter mortars division of Russian occupation forces hit the positions near the settlement the Bottom, and from mortars caliber 82 mm at the support points close to Novomoskovka. Of automatic grenade launchers, the enemy covered the Crimean defenders, and machine guns of large calibers, the defenders of Popasnaya.

Two servicemen of Armed Forces of Ukraine were killed and five defenders injured.

Previously, the defense Ministry stated about the readiness of the imposition of martial law.