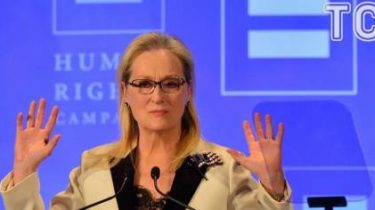 In particular, she took a picture with a sign plate #FreeSentsov. About this on his page in Facebook said MP of Ukraine Mustafa Nayem.

The MP said that the actress is a longtime friend and partner of PEN American center, which was awarded in absentia Sentsov prize “Freedom to write”. According to Nayem, Meryl Streep was aware that among the nominees are a convicted Director, but the details of his story didn’t.

“During a short dialogue, I was able to talk in some detail about her history Oleg Shevtsova about his case, about his family, about the Crimea, forcibly imposed nationality and his two children, remaining in the annexed territory — She was keenly interested in the details and in the end of the conversation she asked, “what can we do to help him.” I told about the initiative of PEN America to assemble a coalition of international organizations that would advocate for the release of Oleg from prison and invited her to symbolically support Oleg a photo with a sign #FreeSentsov” – said Nayem.

He also added that Meryl Streep agreed to a photo without any reservations, adding: “you know what, let’s get together – who would believe that I came up with this sign”. 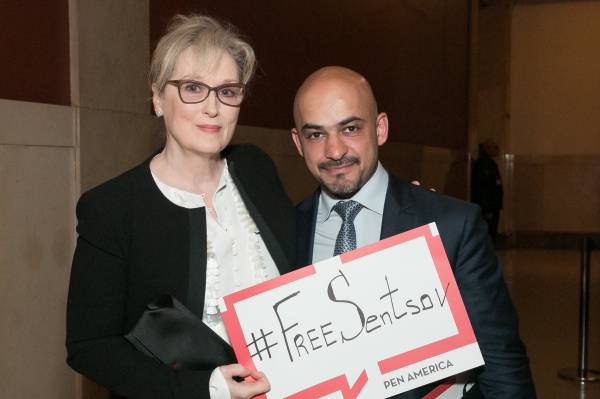 “Later, during the ceremony, when the screen showed a video about the nomination of Oleg award, she cried. After the ceremony we talked to her again. The actress said that he is ready to join the campaign of the PEN center for the release of Oleg,” said the MP.

We will remind, earlier it was reported that Oleg Sentsov in absentia awarded the PEN American club “Freedom to write”. Ukraine was represented at the ceremony cousin of Oleg, Natalia Kaplan and other concerned Ukrainians. This award is an important event not only for new York. The fact that it was awarded in 1987. Of the 42 winners at the time of awarding most of them were behind bars. But many of them are laid off within 18 months after the ceremony.

Please note that the Ukrainian film Director, screenwriter and activist Bromido Oleg Sentsova Russian FSB detained in the night of 11 may 2014 in Simferopol and accused of preparing attacks in the Crimea, in particular, He is charged with the management of subversive and terrorist group “Right sector”, which allegedly made on 14 and 18 April 2014 arson of the headquarters of the “Russian community of Crimea” and “United Russia” in Simferopol, and also prepared in the Crimean capital of explosions near the Lenin monument and the Eternal flame.

25 Aug 2015 Sentsov was sentenced to 20 years imprisonment in a strict regime colony.