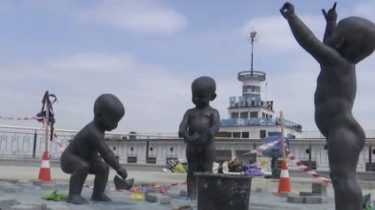 In the capital there will be one more monument to the founders of Kiev. Kyi, Schek, Horeb and their sister Lybid will appear in images of children, according to a story TSN.19:30.

The bronze statue is mounted on an updated Postal square. Its official opening is scheduled for may 6. While there are last preparations for the opening of the reconstructed square.

Vladimir Zhuravel is the author of the sculptural composition. his idea hatched 8 years. However, the work of 30-year-old sculptor was found until now. One of the boys poured their own expense. For the rest of the children later found investors.