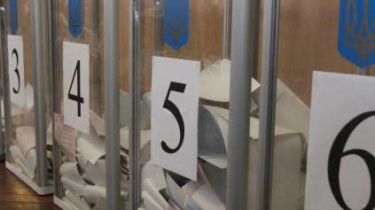 According to preliminary estimates of the election results in the newly merged communities, which took place on 30 April 2017, a convincing majority among the elected chairmen of the GSS is the candidates nominated by the territorial organizations of the Party “BPP “Solidarity” and candidates who supported the Party “BPP “Solidarity”. About it reports a press-Party service. Generally get a victory 26 candidates of the PPB, or more than 55 percent of the total number of elected heads.

Among the winners of the 7 candidates were nominated by the territorial organizations of the Party, 19 candidates were supported by the “BPP “Solidarity”. From the “Opposition bloc” won 3 of the candidate from “Batkivshchyna” — 2.

At the same time representatives “BPP “Solidarity” won in most regions.

Party “Block of Petro Poroshenko “Solidarity” also won in the elections to the newly merged communities. It is expected that, in General, of the BPP in advice if it will have at least 239 deputies, among them 132 deputies, who were nominated by the Territorial organizations of the Party, and 107 independent candidates who were supported by the “BPP “Solidarity”. In particular, the Council Novovodolazhskiy GSS (Kharkiv region) and Trinity GSS (Luhansk region) deputies from BPP got 20 seats out of 26, and in Kuncevskoe GSS (Vinnytsia region) — 11 seats out of 22.

“The victory of candidates of the Party “BPP “Solidarity” in Ukraine once again showed support to the decentralization reform initiated by President Poroshenko. It was under these slogans were our candidates. As the results of the elections, Ukrainians do not support populism and the lack of concrete Affairs”, — said the member of the Central Council of the Party, the people’s Deputy of Ukraine Serhiy Berezenko.

30 April 2017 held a vote in the first local elections in 47 of the United communities. He was elected head of the GSS, as well as relevant local councils.