Near the Trinity APU opened fire in response to the provocations of the militants. Digest ATO 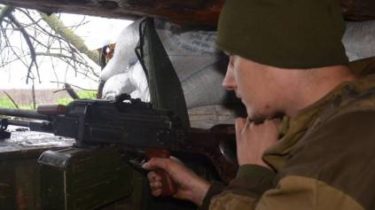 From the beginning of the day, the enemy 28 times fired at positions of the Ukrainian defenders.

On Lugansk the direction fire of mortars 120-mm and 82-mm grenade launchers of various systems and large-caliber machine guns, the enemy covered the strong points close to Crimean and Novozvanovka. 82-millimeter mortars, the enemy used in Katerynivka, and the defenders of the Trinity was fired from mortars 82-mm antitank grenade launchers. Rocket-propelled grenades and heavy machine guns the enemy was beaten at positions near Novoaleksandrovka.

On Donetsk the direction from mortars of a caliber of 120 mm enemy smashes strongholds near Luhansk. 82-millimeter mortars, the enemy used the items Zaytsevy. At the reference points in the vicinity of the Town the enemy was hit from anti-tank grenade launchers, in addition, on this site acted enemy snipers.

In the coastal areas outside pavlopil militants fired at Ukrainian soldiers with grenade launchers. For the defenders of Shirokino, Water, Gotovogo and Krasnogorovka the enemy fired rocket-propelled grenades of various systems and machine guns of large calibers. Near Gotovogo active enemy snipers.

To dull the activity of the enemy near the Trinity, the ATO forces returned fire from automatic grenade launchers.

Since the beginning of the day the four members of the Armed Forces of Ukraine were injured.