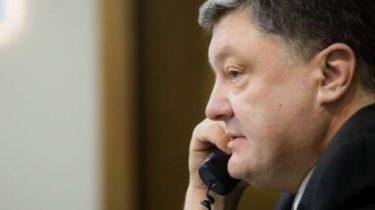 The President of Ukraine Petro Poroshenko congratulated the Prime Minister of Israel Benjamin Netanyahu on the 69th anniversary of Israel’s independence Day, which marks the 2 may.

About it reported in a press-service of the head of state after the telephone conversation leaders.

Besides, the interlocutors expressed hope for the success of the visit of Prime Minister of Ukraine Vladimir Groisman to Israel in may.

In turn, the Ukrainian President has invited Netanyahu to visit Ukraine at a convenient time.

In addition, Poroshenko informed the Israeli Prime Minister about signing a Law on ratification of the Ukrainian-Israeli Agreement on joint production of films and cooperation in the field of cinematography.

We will remind, in December of 2016, it was reported that the State of Israel in the framework of the agreement on temporary employment of citizens of Ukraine is going to employ 20 thousand Ukrainian workers in the construction industry.

November 16, the Verkhovna Rada of Ukraine ratified the agreement on temporary employment of Ukrainians in Israel. In accordance with this agreement, Ukrainian workers in Israel have equal rights with local workers.