Kiev began to litter less on the holiday in recent years 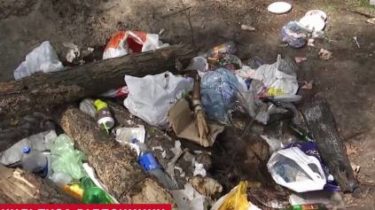 After the mass the may picnic kiyani left behind garbage – bottles and trash thrown primarily in the areas of natural rest. Garbage mountain appeared at the entrance to the recreation area “birch”, where the rest of the residents of Troeschina, says the story TSN.19:30.

“Our people are pigs, sorry” – said from Kiev, which removes not only his own, but someone else’s garbage, but it is recognized that to cope with its rapid growth during the holidays can not. Why grow heap of rubbish – says the man who throws a plastic bottle on a bunch of other garbage. “And you can not buck to put here? I – a taxpayer, why should I suffer?”, – he explains.

Garbage are not only communal and enthusiasts, and employees of clearing houses – they work near palm lake in Obolon. Popular recreation area periodically closed to swimming due to E. coli and drugabusers, but in recent years, no rats, no infections were not observed. And this is the best example of why you need to clean up after themselves.