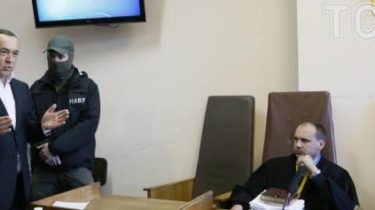 Wednesday, may 3, the Kyiv court of Appeals will consider the appeal of Specialized anti-corruption Prosecutor on the decision of Solomenskiy district court of refusal to arrest Mykola Martynenko.

Due to the lack of case materials and with the support of the parties of process, the court decided to postpone the meeting on 12 may at 10:00. In General, the meeting lasted a few minutes.

26 APR SAP appealed the decision of the investigating judge of Solomensky court of election of a measure of restraint for former people’s Deputy Nikolay Martynenko. The Prosecutor’s office demands to cancel the decision of the court of first instance and make a new decision in which he asks to elect a suspect measure of restraint in form of detention for 60 days with the alternative of bail of 300 million UAH. Was appealed short text of the judgment, because the full text is available only in the last day, when it can be appealed.

We will remind, on April 20, detectives NABOO and SAP prosecutors arrested two people — former Deputy Mykola Martynenko and his accomplice Sergei Fracture on suspicion of forming a criminal organization and of misappropriation and embezzlement of property per SE “VostGOK” damages in the amount of 17.28 million dollars.