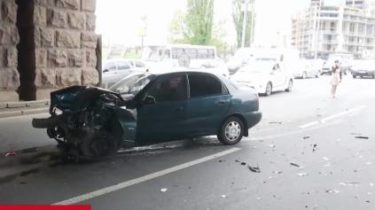 In the capital two days in a row on one and the same place happen terrible traffic accident. Their result was four broken car, one dead and three injured, according to a story TSN.19:30.

So far, the Victory Avenue in the area of the Vozduhoflotsky bridge was considered a relatively safe place where the number of accidents does not exceed the average level. On the morning of Tuesday and Wednesday there were two accidents, the cause of which was a significant excess of speed. Now there are the footage of CCTV cameras, which recorded the dreadful moment of death in a red taxi driver.