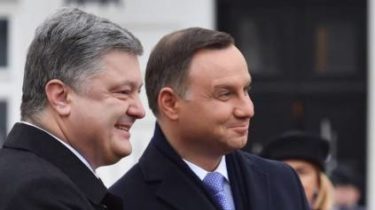 The President of Ukraine Petro Poroshenko held a telephone conversation with President of Poland Andrzej Duda.

During the conversation, Poroshenko condemned the incident with the dismantling of the Ukrainian monument in the village Krusovice near Przemysl on 26 April. He stressed the unacceptability of desecration of the state symbols of Ukraine and noted that this requires the reaction of the Polish leadership.

In his turn, the dude promised to “personally review this incident and give it a proper evaluation, in order to prevent similar recurrences in the future.”

The two sides also agreed to coordinate for the legalization of all burial sites in Poland and Ukraine.

In addition, in the context of the 70th anniversary of operation “Visla” Poroshenko expressed the hope “that the position of the Polish leadership about a strong condemnation of this crime of the Communist regime, in which 140 thousand Ukrainians were forcibly evicted from their homes”.

Operation “Vistula”. All about the ethnic cleansing of Ukrainians by the Polish Communists

We will remind, activists and representatives of the Polish nationalist organizations was dismantled in the cemetery of the village near Przemysl Grochowicz a funerary monument to soldiers of the UPA, who are already plunderous vandals. At the same time the police are involved.

The head of the OUN Bohdan Chervak, in turn, stressed that the recent dismantling of the monument to soldiers of the UPA in Poland was done boldly and with the permission of local authorities.